National Bourbon Heritage Month is an observance in the United States that calls for celebration of bourbon as America’s “Native Spirit” during the month of September. On August 2, 2007, the US Senate declared September 2007 as “National Bourbon Heritage Month.”  The bill, sponsored by Republican Senator Jim Bunning of Kentucky, passed by unanimous consent. The resolution calls for consumers who enjoy bourbon to do so responsibly and in moderation. The bill reinforces the 1964 Act of Congress that declared bourbon “America’s Native Spirit” by celebrating the family heritage, tradition and deep-rooted legacy that the bourbon industry contributes to the United States. (source, Wikipedia).

To celebrate the The Native Spirit Bundled Bourbon Box celebrates National Bourbon Heritage Month with three different cocktails – but we know that people love to celebrate bourbon with a shot, so a Lonerider Spirits shot glass is the mystery gift! The cocktails featured in this box are the Spiced Fig, Bourbon Apple Shrub and the Bourbon Mojito. All of these cocktails have a “savory” component – just right for National Bourbon Heritage Month. If you want to skip ahead, you can order here! 3 cocktail recipes are included in each box with enough to make 4 cocktails per recipe for a total of 12 cocktails!

Let’s explore the box that will be released in September 2020!

Bourbon Heritage Month wouldn’t be complete without some history, so this cocktail recipe comes from Basil Hayden’s. 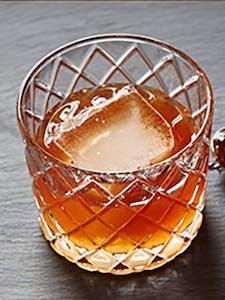 The Basil Hayden’s bourbon brand was introduced in 1992 and is named in honor of Meredith Basil Hayden Sr. Hayden was a distiller, and he used a larger amount of rye in his mash than in some other bourbons. Later, Hayden’s grandson Raymond B. Hayden founded a distillery in Nelson County and named his label “Old Grand-Dad“, in honor of his grandfather, which bears a rendering of Basil Sr.’s likeness. When Beam Industries introduced their “small batch” collection, among the four was “Basil Hayden’s,” which the company says uses a mash similar to that originally utilized by Hayden in 1792.

The brand expression was originally labeled as “Aged 8 Years”, but in 2014, the age statement was replaced by “Artfully Aged”, indicating that the brand no longer carries an age guarantee.

The Heydons (original spelling) emigrated to the Virginia Colony in the 1660s, when much of Britain became inhospitable to Catholics. Francis Hayden, Basil Sr.’s great-grandfather and the first Heydon (then switching to Hayden), moved from Virginia to Maryland in 1678, settling in St. Mary’s County on St. Clement’s Bay, where the family remained until Basil led his band of Catholic families into present-day Nelson County, Kentucky. During the American Revolution, Basil Sr. supplied provisions to the Colonial Army.

Hayden’s family can be traced back to England (Norfolk) to the period shortly after the Norman Conquest. One ancestor, Simon de Heydon, was knighted by Richard the Lionheart in the Holy Land during the Third Crusade in the 1190s. His son, Thomas de Heydon, was made Justice Itinerant of Norfolk by Henry III. Around 1400, another ancestor, John Heydon, appears to have been associated with “The Grove” – a large estate in Watford (Hertfordshire), located about twenty miles northwest of London. Some researchers have speculated that John Heydon was given the estate for his father Sir Richard de Heydon’s services in the French Wars, where Sir Richard perished. Others are less sure. But Heydons definitely lived in Watford from the fourteenth through seventeenth centuries. (source: Wikipedia)

This recipe comes to us from the food blog “Nutmeg Nanny”. 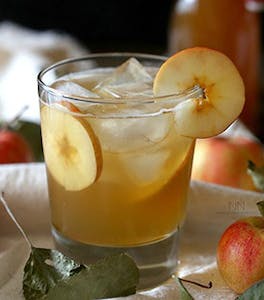 September is the time when all the apples are coming in at the orchards, so we decided to pair it with bourbon for an interesting combination. This recipe is made with apple shrub, bourbon, ginger ale and bitters.

Again, we are going to be educating people on some cocktail terminology and you won’t be drinking foliage – so here is what a shrub is so you can impress your local bartender.

In drink terms, a shrub is a concentrated syrup that combines fruit, sugar, and vinegar. The result is a sweet, acidic mixer that can be enjoyed on its own or used in a variety of mixed drinks. Quite often, herbs and spices are also used to created interesting flavor combinations.

Shrubs are an excellent way to add a new zing to cocktails and they’re quite versatile. For instance, an apple fennel shrub can be paired with a shot of bourbon and a splash of ginger beer. Likewise, a cranberry-fig shrub is excellent with an aged rum, ruby port, and ginger beer or ginger ale. Apple shrubs like the one we feature this month are also quite popular, mixing well with tequila, mezcal, whiskey, or vodka.

The spiced apple shrub comes to us from Tait Farm Foods – they are a specialty food company in Central Pennsylvania that makes shrubs, preserves, chutneys, vinagrettes, dessert sauces, local products and gift collections.

This recipe shows off the versatility of bourbon by taking a traditional recipe made with rum and making it into a bourbon drink. 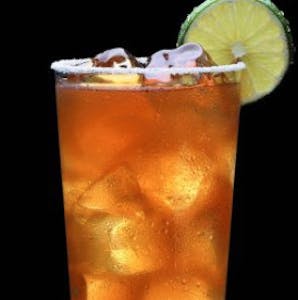 Faced with a lot of mint in the garden….no wait… it’s really “a lot” x 1000, I had to do something. As anyone who has grown mint knows, it grows and grows and grows. I recently went too long without watering my garden and I thought my mint had perished. Nope. Just add water and wait a couple of hours – it’s back and bigger than ever.

This recipe is adapted (with modifications) from one made on a television show put out by “Fine Cooking” called “Moveable Feast.” It’s actually a pretty decent show.

I’m not really into watching many cooking shows, but this one grabs my interest most of the time. They travel around, meet local growers and chefs and make a meal for a group of people – usually in a scenic, interesting outdoor setting.

I like that they feature local growers and businesses and showcase how important they are and what a difference they make in eating healthy meals with fresh ingredients.

That’s the rundown of the Bundled Bourbon Box for August! No alcohol is in this box – we will tell you what to provide in the kit instructions!

This box is available now through September 10 – subscribe to get yours!  September 14 we will begin shipping out the first box and we plan on possibly shipping a second round of shipping on September 21 to due to the COVID-19 pandemic. We also offer 3-month, 6-month and 12-month gift subscriptions. 3 cocktail recipes are included in each box with enough to make 4 cocktails per recipe for a total of 12 cocktails!