Summer around the world is in full swing and the heat is on! In bourbon country the bourbon barrels are expanding in their rickhouses in the summer heat. The extreme temperatures in these rickhouses contribute to the evaporation of the bourbon into the heavens, so this byproduct of bourbon barrels aging is known as the “angels share”. Interestingly, the “angels share” removes roughly 2% of the volume of the bourbon in the barrel per year.

The Midsummer’s Heat Bundled Bourbon Box celebrates summer with three different cocktails – but two cocktails need to be muddled – so a muddler is the free gift this month! The cocktails featured in this box are the Black Cherry Old Fashioned, Midsummer’s Heat (the namesake of the box) and the Kentucky Buck. Fruit is a common theme in all of these cocktails from cherries to blackberries and strawberries. If you want to skip ahead, you can order here! 3 cocktail recipes are included in each box with enough to make 4 cocktails per recipe for a total of 12 cocktails!

Let’s explore the box that will be released in August 2020!

An Old-Fashioned is one of the oldest cocktails on record – in 1862 a book is published giving instructions and recipes from the “early bartending” days – it is called: Jerry Thomas’ Bartenders Guide: How To Mix Drinks. 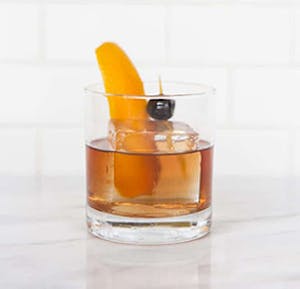 One drink that is described in this book is made “Crush a small lump of sugar in a whiskey glass containing a little water, add a lump of ice, two dashes of Angostura bitters, a small piece of lemon peel, one jigger Holland gin. Mix with small bar spoon. Serve.” This is known as the Old Fashioned Holland Gin Cocktail.

This is the first instance that the cocktail is known as an “Old-Fashioned”, but it’s not made with bourbon or whiskey and never mentioned in any of the other recipes.

We’re going to put a twist on this classic recipe with the Black Cherry Old-Fashioned – its the dark, bold and spiced version of the traditional recipe. It is made with bourbon Bitterless Marriage Bitters from Crude Bitters in Raleigh, NC , black cherry syrup, poured over rock/big ball of ice, and then then finishing touch is a homemade Luxardo cherry.

This recipe comes to us from Kristen who is the writer of the blog “Feast In Thyme”. 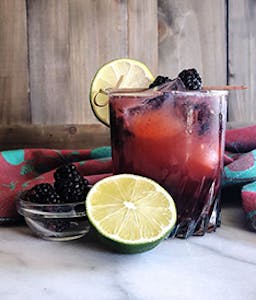 Since summer is in full swing we thought that we would turn it up a notch and offer a blackberry smash that had some real kick to it. We also want to profile the makers of the key ingredient which is the Caged Heat Cocktail Syrup.

Many moons ago, The founders of Nickel Dime Cocktail Syrups – Jared and Absinthia – created a spicy offering that featuring ghost pepper (the hottest pepper in the world), tamarind and cardamom. They called this new product Caged Heat. The cocktail scene was booming in Oakland, California – where Jared is a bartender and he creates the spicy concoction in a bar called “Sidecar”. Absinthia was already making additives for the craft cocktail industry and was the creator of Absinthia’s Absinthe Blanche. The two formed the company Nickel Dime Cocktail Syrups to sell and market the new product. The pair then funded a successful Kickstarter campaign in 2015 and from that success Caged Heat is currently available on Amazon Marketplace and throughout the United States.

With fresh fruit, tart lime juice, and the award-winning Caged Heat Cocktail Syrup – this cocktail for summer is a spicy treat that will bring up the temperature in your palette! 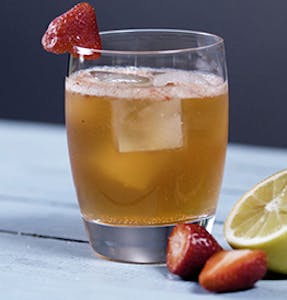 When people see the word “buck” they usually think of broncos or possibly that 10-point stag. However, “Bucks” in the cocktail world are libations that consist of ginger beer plus citrus and your favorite spirit — so technically a Moscow Mule is actually a “Moscow Buck” in disguise.

This cocktail features non-alcoholic Quinnger ginger beer – it’s a recipe from Raleigh, NC from brewer Quinn McKee and it’s only been available on the market for the last couple of years – but Quinn has been making his wonderful ginger concoction for over seven years. “Quinnger Beer” is named after it’s inventor, but bartenders, ginger beer experts (yes, there are experts out there) and restaurateurs love it’s freshness, spice and the way it makes spirits shine.

Quinnger Beer is made with hand-picked ingredients in small batches and Quinn supervises every step of the process. This is evident when you crack open a can of Quinnger Beer and take a first sip.

It’s definitely a treasure in Raleigh, NC and now we get to share it with all of our bourbon loving friends!

That’s the rundown of the Bundled Bourbon Box for August! No alcohol is in this box – we will tell you what to provide in the kit instructions!

This box is available now through August 15 – subscribe to get yours! August 15 we will begin shipping out the first box and we plan on possibly shipping a second round of shipping on August 22 to due to the COVID-19 pandemic. We also offer 3-month, 6-month and 12-month gift subscriptions. 3 cocktail recipes are included in each box with enough to make 4 cocktails per recipe for a total of 12 cocktails!