The end of the year is nigh! December is right around the bend and the end of 2020 is coming. I’m sure most of us are relieved it will be over soon and a brighter 2021 is ahead. We should be able to make a few cocktails by the end of the year and send off 2020 with a couple of toasts during the holidays!

As with all of our boxes – we will supply you with the ingredients for three cocktails. This month’s box contains the following cocktails –  The Blizzard (the namesake of the box), a rosemary-infused cranberry bourbon martini, and the Vanilla Chai Old Fashioned. The mystery gift is a circular ice mold so that you can make your own perfect ice balls for these cocktails and ones you will make in the future. All of these cocktails will warm you up for the cold days ahead! If you want to skip ahead, you can order here! 3 cocktail recipes are included in each box with enough to make 4 cocktails per recipe for a total of 12 cocktails!

Let’s explore the box that will be released in December 2020!

Right out of the box we have a cocktail called “The Blizzard”. It’s not a Blizzard like you would find at Dairy Queen – it’s a little more potent. This scrumptious-looking recipe for the Blizzard Bourbon Cranberry Cocktail is from Erin Parker, The Speckled Palate. 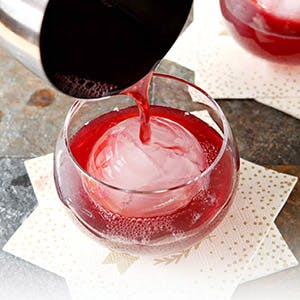 Looking for a unique bourbon drink to enjoy during Christmas and possibly New Year’s Eve? It’s not overwhelmingly sweet and “The Blizzard” is a cranberry-based bourbon cocktail that is perfect for the months of winter.

Wikipedia explains that in the United States, the National Weather Service defines a blizzard as a severe snow storm characterized by strong winds causing blowing snow that results in low visibilities. The difference between a blizzard and a snowstorm is the strength of the wind, not the amount of snow. To be a blizzard, a snow storm must have sustained winds or frequent gusts that are greater than or equal to 56 km/h (35 mph) with blowing or drifting snow which reduces visibility to 400 m or 0.25 mi or less and must last for a prolonged period of time—typically three hours or more.

While severe cold and large amounts of drifting snow may accompany blizzards, they are not required. Blizzards can bring whiteout conditions, and can paralyze regions for days at a time, particularly where snowfall is unusual or rare.

A severe blizzard has winds over 72 km/h (45 mph), near zero visibility, and temperatures of −12 °C (10 °F) or lower. In Antarctica, blizzards are associated with winds spilling over the edge of the ice plateau at an average velocity of 160 km/h (99 mph).

This awesome recipe comes to us from Lisa at Lisa’s Dinnertime Dish. 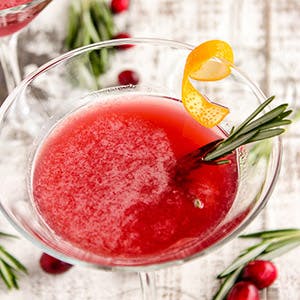 A rosemary-infused cranberry bourbon martini is a signature cocktail that’s festive, fragrant, and fruity. It’s sure to be a hit at any holiday celebration (please celebrate safely!).

According to Wikipedia – cranberries are harvested in the fall when the fruit takes on its distinctive deep red color. Berries that receive sun turn a deep red when fully ripe, while those that do not fully mature are a pale pink or white color. This is usually in September through the first part of November. To harvest cranberries, the beds are flooded with six to eight inches (15 to 20 centimeters) of water above the vines. A harvester is driven through the beds to remove the fruit from the vines. For the past 50 years, water reel-type harvesters have been used. Harvested cranberries float in the water and can be corralled into a corner of the bed and conveyed or pumped from the bed. From the farm, cranberries are taken to receiving stations where they are cleaned, sorted, and stored prior to packaging or processing. While cranberries are harvested when they take on their deep red color, they can also be harvested beforehand when they are still white, which is how white cranberry juice is made. Yields are lower on beds harvested early and the early flooding tends to damage vines, but not severely. Vines can also be trained through dry picking to help avoid damage in subsequent harvests.

This recipe was created by Tieghan Gerard – she is a Half Baked Harvest blogger and cookbook author – find out more at halfbakedharvest.com. 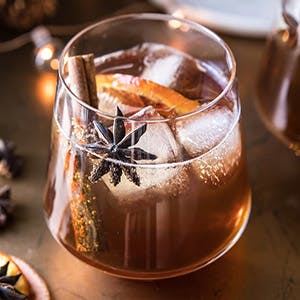 A dram of bourbon is always good in winter and simple old-fashioned are the “go-to” drink of choice. However, bourbon is so versatile that you can dress it up, dress it down or just drink it straight. This cocktail is made with homemade spiced chai simple syrup, mixed with warming bourbon, winter citrus, a touch of vanilla, and fizzy sparkling water.

The recipe or preparation method for masala chai (chai) is not fixed, and many families have their own versions of the tea. Most chai contains caffeine, typically one-third that of coffee (if made with a black tea base). The tea leaves steep in the hot water long enough to extract intense flavour, ideally without releasing the bitter tannins. Because of the large range of possible variations, masala chai can be considered a class of tea rather than a specific kind. However, masala chai has five basic components which are almost always present: water, tea leaves, milk, sugar, a mixture of cardamom and black pepper, and ginger. The western adaption of chai, or chai latte, has a lighter and sweeter taste than the Indian version of a more herbal and spicier milk beverage. – Wikipedia.

That’s the rundown of the Bundled Bourbon Box for December! No alcohol is in this box – we will tell you what to provide in the kit instructions!

This box is available now through December 11 – subscribe to get yours! 3 cocktail recipes are included in each box with enough to make 4 cocktails per recipe for a total of 12 cocktails!

Our Elves Have Been Working Overtime!
LONERIDER SPIRITS AWARDED TWO GOLD MEDALS AND ONE SILVER MEDAL AT THE USA SPIRITS RATINGS COMPETITION