Bourbon is America’s drink and we at Lonerider Spirits founded the company on making the best bourbon possible. We looked at the marketplace and noted that cocktail boxes covered the entire gamut of spirits, but no cocktail box really drilled down into a specific type of alcohol and really explored it. Until now with the introduction of the Lonerider Spirits “Bundled Bourbon Cocktail Box”. We’re going to focus on bourbon and it’s versatility in an exclusively themed cocktail box for bourbon lovers. If you want to skip ahead, you can order here!

We’re located in North Carolina, so we can’t ship bourbon to consumers. However, we can ship you ingredients to make your bourbon taste amazing at home.  Three different cocktail recipes will be shipped to you each month, so you can experiment at your own bar making some high quality bourbon cocktails. Also, we’re going to include a free “mystery” gift. The free gift may help you make better cocktails, it may be something sweet like bourbon chocolates or possibly a piece of swag from Lonerider Spirits that you can wear while making your concoctions! 3 cocktail recipes are included in each box with enough to make 4 cocktails per recipe for a total of 12 cocktails!

Each month we will be exploring the different flavors of cocktails made exclusively with bourbon. One month will feature sweet cocktails, the next month spicy and we’ll keep going… Also, we realize that for the holidays you may want a bourbon punch or for the Labor Day barbecue you may want something that is frosty and frozen. We will have you covered with that special themed box, fellow bourbon lover!

Let’s explore the first box that will be released in July 2020! We will feature a classic cocktail, a well-known cocktail that can be accomplished with bourbon and a simple no-fuss standby libation – they are the Gold Rush, the Hibiscus Bourbon-Rita and the Smoked and Salted.

You don’t have to be a professional bartender to make a classic simple cocktail – just look at one of our initial offerings – the Gold Rush. 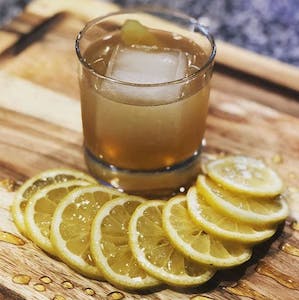 New York City is always a cocktail mecca and in 2000 the bar called Milk & Honey was founded by Sasha Petraske and he had some help from an investor and a bartender named T.J. Siegel. A staple in all bars is simple syrup, but one night the bar had created a luxurious honey syrup and T.J. Siegel asked for a Whiskey Sour made with the honey syrup. This simple change created one of the most iconic whiskey cocktails.

Since most cocktails require special ingredients or mixing up something special the Gold Rush took off since it was so easy to make (anyone can make honey simple syrup). It became popular at bars across the globe and earned its place as a staple on the drink menu at Milk & Honey. The simplicity of honey simple syrup, bourbon and lemon form a perfect drink with minimal preparation time.

The great thing about the Gold Rush is that if a budding mixologist wants to experiment by changing one ingredient a whole new taste can be created. It’s the perfect cocktail start the journey into different tastes of bourbon cocktails.

The Gold Rush needs a rye bourbon to give it the counter-punch to the lemon and honey. Wheated bourbons will be overwhelmed by the ingredients, so look for something to compliment the flavors. To get more punch out of your cocktail we suggest using a higher proof bourbon.

Distillers and bartenders usually give props for inventive drink recipes and this recipe comes from Shelly Hopson at the Oregon Spirit Distillers. 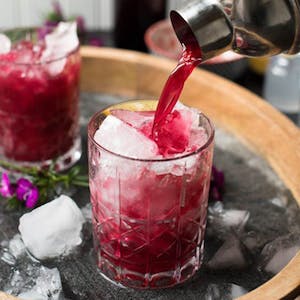 It’s a cocktail that shows how bourbon can be substituted for another spirit (tequila) and it makes an excellent Bourmargarita – but we’ll call it a Bourbon-Rita! It’s an excellent tart drink for hot summer days and the orange notes balance out the soft sweetness of the hibiscus. It’s a well rounded cocktail that will please all different types of cocktail aficionados.

Lime and orange are common cocktail ingredients, but hibiscus is quite unusual. What’s special about this plant? Hibiscus is a group of flowering plants that can be found in tropical and subtropical regions of the world. It’s flower is edible and is known for it’s bright red color, tangy sweetness and being a great source of vitamin C.

The flowers of a hibiscus plant are big and bees love their prominent stigma. The buds of the hibiscus flower look delicious and many species of hibiscus are edible. Throughout Asia, Africa, the Caribbean and the Americas the plant is used in food and beverages. It has multiple names like sorrel, flor de Jamaica and roselle.

When dried, the hibiscus petals have a tart flavor with a punch (like cranberry) and of course add a vibrant red coloring to cocktails. The flower sweetens drinks in Thailand, is used in Egyptian and African spiced teas, and brings its unique character to aguas frescas in Mexico. Hibiscus pairs well when used with ginger, cinnamon and mint. Its versatility is noted by bartenders who can make drinks be made more tart with citrus or sweetened with honey.

The Hibiscus Bourbon-Rita is great for summertime parties and can be made in large batches and served as a punch.

The Smoked and Salted

The Smoked and Salted cocktail is deceptively simple, but packs a big flavor.

This cocktail was featured in Town and Country magazine in 2020 and was created by Andrea Morris, Beverage Director at Intersect by Lexus in New York City.

The Smoked and Salted features “Pooter” bitters by Crude Bitters in Raleigh, North Carolina which uses Lapsang tea to provide the smoke aroma and flavor to create “a killer Bloody Mary finish, and good for rubs or grilled fish.” – but it’s also ideal for cocktails.

Crude Bitters was founded by Craig and Lindsay Rudewicz in 2013. Craig was a bartender that experimented with making different bitters and finally decided to create a company and sell them.

The origin of bitters stems out of the days of “snake oil” and other remedies in the early 1800’s. Back in those days bitters was supposedly able to cure gout, malaria and headaches. Unfortunately some less scrupulous “health professionals” started adding in poisonous plants. The U.S. government then started to control bitters – labeling them as a flavoring rather than a magic health aid.

Most bourbon drinkers are familiar with bitters has Angostura which is a remnant from those days and when most people want bitters in their drink this is what most bartenders will add. It’s the most dominant brand on the market today along with Peychaud’s (which was invented for a New Orleans bar back in the 1800’s also). Angostura has strong black spice, cinnamon and clove notes. Peychaud’s has more licorice and a floral flavor.

Prohibition was the next big resurgence for bitters since the health care demand went dormant. A speakeasy would add bitters to their bathtub whiskey or gin to make the cocktail taste less like their bathroom science experiment and more like an actual cocktail a patron would get at a club. The “bathtub” versions of alcohol were pretty horrible even if you didn’t go blind. The criminal element figured out their backroom bars could sell more alcohol if they added bitters to cover over the awful taste.

Old-fashioneds were a pretty popular cocktail after the U.S. ended Prohibition and bitters were primarily used in that type of cocktail. In 2008-2009 bitters made a resurgence into the hipster cocktail scene and the demand for Angostura caused it’s stock to be depleted which opened up the door for other adventurous bartenders (like Craig at Crude Bitters) to start their own brands.

That’s the rundown of the Bundled Bourbon Box for July! No alcohol is in this box – we will tell you what to provide in the kit instructions!

This box is available now through July 15 – subscribe to get yours! July 15 we will begin shipping out the first box and we plan on possibly shipping a second round of shipping on July 22 to  due to the COVID-19 pandemic. We also offer 3-month, 6-month and 12-month gift subscriptions. 3 cocktail recipes are included in each box with enough to make 4 cocktails per recipe for a total of 12 cocktails!